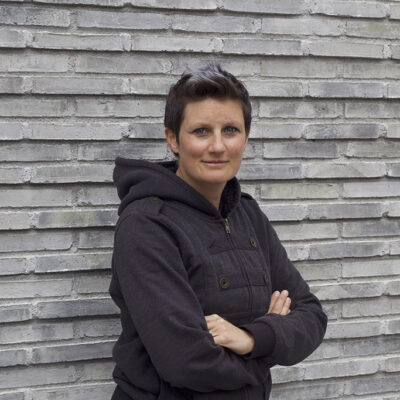 Angie, can you tell us a bit about your professional journey and how you came to be a professor in Digital Ideation?

When I studied interaction design I was interested in the topic of usability and for my bachelor thesis I got the chance to do my first usability study for an intranet at Novartis. I got really excited about the topic and joined Zeix, back then the largest UX agency in Switzerland. I was lucky to learn from some amazing people in the field and ended up becoming a partner at the agency. In order to get an MBA I moved to Australia, and after some work in service design and other related fields, I always kept coming back to UX. In Australia I got interested in passing on my experience and started lecturing at a university. Which is why I then looked for an opportunity to do this in Switzerland and found a great job at HSLU in Lucerne. I don’t teach full time, by the way, I work as a UX practitioner, too.

How did you become interested in UX? And what do you love about UX?

I have always been fascinated with technology and found it a pity that so much stuff was so hard to use. It annoyed me when friends and family couldn’t reach their goals. It’s what I still love about UX today: making technology accessible so that everyone (or at least your target group) can benefit from it.

What is the best or worst career advice you ever received?

One of the crucial things someone said to me when I was debating which Master program to join was “Don’t study something you read a lot and educate yourself about anyway, pick something you think will be useful to you, but where need the structure of a formal study program to push you through.”. That’s why I ended up doing an MBA (Master of Business Administration).

What’s the most challenging situation you’ve encountered as a professor in Digital Ideation so far?

I find UX is generally very challenging to teach. Especially the research side of it. So much depends on language and how we use it, and there are so many traps because of our human biases.

But even on the design side there is often not a right and wrong, a lot of times one solution is better than the other, but only if taken as a whole. There are so many dependencies, it’s difficult to compartmentalize an interface, and hence it’s a challenge to come up with a way to cut the knowledge into digestible chunks of information.

Because I have learned most of it on the job, it’s now a challenge to unwind that and think about how I learned the things I know. Plus, the field changes all the time, so we need to make sure our curriculum stays current; I can’t just reuse the same slides every year.

What do you think will be important in UX in the next 5-10 years? What are some trends you are observing?

I think a lot will happen to the role of UX in-house / in corporates: Similar to roles & functions like design ops, I think we will start to see UX research ops, a function in the business that brings together UX research and helps distribute the knowledge gained.

I also wouldn’t be surprised if we keep seeing UX teams hopping from marketing to IT to an individual “Digital” function and back.

And I have a wish for something to become a trend: that we can focus more on quality over speed and on expertise rather than the dilution of the UX skills I currently observe. Last year I was able to contribute to a book (Delta CX by Debbie Levitt) that talks a lot about this.

What are the differences in UX between Switzerland and Australia?

Generally speaking, both countries are “ahead” in some aspects and “behind” in others. But I did find some differences which had an influence on UX work:
I lived and worked mainly in Melbourne, which has a population of around 4.5 million. That means we have easier access to people than in Switzerland, e.g., for meetups, but also for recruiting test participants if they had to show up in person.

One of the very obvious differences on the design side is that in Switzerland, we have to cater to multiple languages all the time. Starting with the research all the way through prototyping and then the final UI design – in most projects we need to keep in mind translations. I didn’t encounter that much in Australia.

In Australia there was always a debate about regional differences. Is it enough to conduct research in one city? Melbourne vs Sydney, do we need to involve Brisbane too? Yet in most projects in Switzerland, the main difference was between people who live in a rural vs. people from an urban environment.

Your talk title at European PO&RE Day is “Mythos “Lean” UX”. What does this title mean?

There has been a big trend to “go lean”, especially in larger and agile software projects. It sounds great: let’s cut all the waste and get faster results. Yet our observation is that this leads to a dilution of the UX expertise: everyone is supposed to do UX work, we can just take a quick Design Thinking seminar and – tadah – we’re making interfaces. Yet when we cut corners a lot of valuable insight is lost. Research is either reduced to internal stakeholder interviews or to a quick test in-house with peers rather than with real customers. We’ve seen teams get together and co-design without any true UX expertise and the outcome was almost always terrible. It’s quite a challenge because everyone who has ever clicked on a button thinks they can create an interface. In the end no money is saved because applications have to be fixed or rebuilt.

What do you enjoy doing outside of the office?

I love watching and playing all sorts of sports. In Australia, I played a lot of beach volleyball and soccer. I just had a daughter, so at the moment she and our dogs keep me pretty busy. And I really enjoy good food, it doesn’t matter if cooked at home or in a nice restaurant.